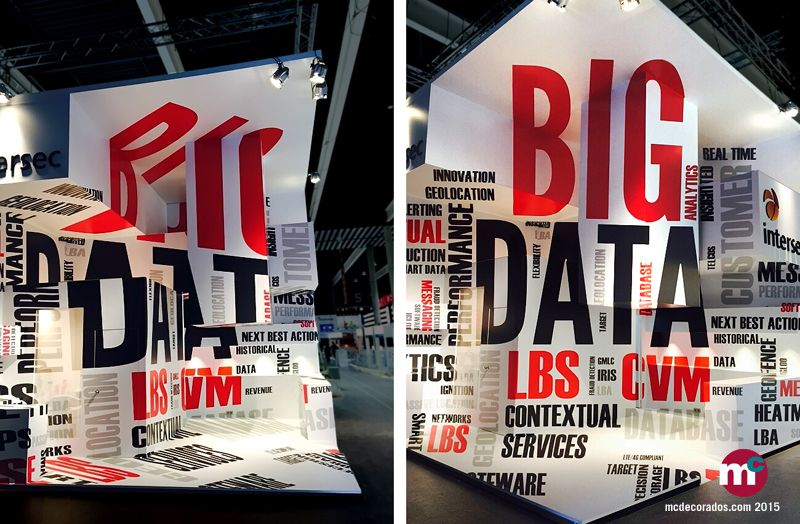 Intersec stand at the MWC 2015 in Barcelona

Based on large rectangular volumes. The central area is suspended from the ceiling hanging a large volume of 3.80m high and 1.5m square base, built with light materials and latest technology. Without doubt it is a construction that defies gravity, achieved by a technical study of suspension volumes on pre-rigging.

Graphically, working on the concept of managing data as Intersec signature product, it reflects multiple texts that match the brand image. With them, it has become a game of perspective between the volumes that make up the stand to be legible from a single point, 5 meters at an angle of 45 ° to the ground.

To achieve this effect of perspective, has done a study using a digital three-dimensional reproduction based on human focal length that forms an image inside the eye, which ranges between 22 and 24 mm, angle and position of the point of view regarding the overall volume of the stand of 216 cubic meters and the vanishing points of all volumes.

All graphic has been segmented into faces and applied to the surface by printed vinyl and micro opaque areas in the window of the meeting room. Application performed by the company Visual Group G2.

The result of the stand is a great set of rectangular blocks with unreadable chart until the visitor arrives at the key point, where words are composed of graphic legibly by the message signature.

A single stand at WMC 2015 in Barcelona.